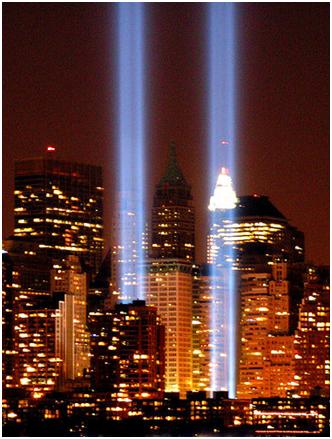 Nine years ago, September 12, I was totally detached from the instant feed of information. I had a cell phone but it served as what it was invented for – phone calls. I did not surf the web with it, and Twitter was not invented yet. Despite the fact I slept early the night before, I was running late for class. I remember wearing a plain with t-shirt because I ran out of clean clothes. I remember running past several classrooms filled with uninteresting and disinterested students who were all thinking it is too early to be in class. My friend Kiel was late as well, but he had concern in his face when he asked “Do you have family in New York?”

I was then a student in a Catholic college in the Philippines begrudgingly taking accounting. It was the second of the two financial accounting classes I was late for that morning – lecture for that week was different kinds of dividends. I recall that my professor was irate the day before for not paying attention to her – she singled me out in class for snickering a little too loud on a joke shared between me and my friend who I chose to sit next to for the rest of the semester. But that morning, as I walked in, she asked “Have you heard?” as if the day before did not happen.

I was totally lost – what happened?

She has already told the class what had happened the day before – or more precisely, twelve hours before. Nine in the morning, of September 11th, Philippines was still too early for the late news, and I was already getting ready for bed. Two airplanes were intentionally crashed into the Twin Towers in New York City, a third plane in the Pentagon in Arlington, and a fourth in a field in Pennsylvania. I did not understand what she was saying – one just never says “intentionally” and “crash” in the same sentence. I thought there must be a mistake. A very strong wave of disbelief went through me and I realized at one point that I was holding my breath, waiting for some clincher stating no one was hurt, everything was okay even though this was just utterly outside the realm of reasonableness.

We prayed. We had a minute of silence. I prayed. The class continued the rest of the morning calculating dividends in arrears for preferential stock holders while I continued praying during a time in my life when I considered my faith dead. I found myself praying to a God I hated.

I had no family in New York. I had no friends in the east coast. In fact, I did not know anyone in this part of the country since family from my dad’s side was principally in Colorado. I have no ties, not even loose ones, in New York and yet I was sad. I was disappointed. I felt like humanity failed me. It was hard to wrap my brain around the idea that man can do this to his fellowmen. A minute of silence would not make me comprehend that this is the horrible truth, that we are capable of such damage.

I did not see the hole the towers left behind until the summer of 2005. I looked around and realized New York survived. Somehow, New York was able to peer underneath the bed and stare back at the monster. The pain will not go away – you get use to it.

That same summer, I decided to move. And here I am, a New Yorker. Scarred by a wound I did not bear.